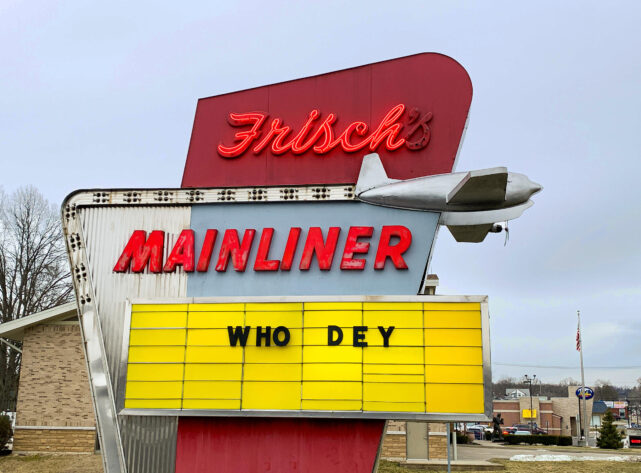 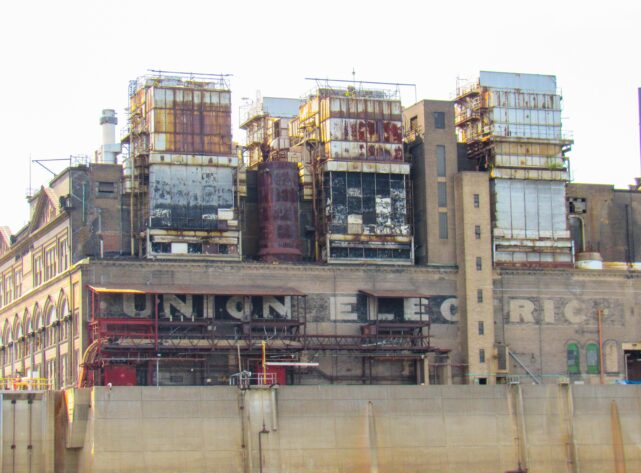 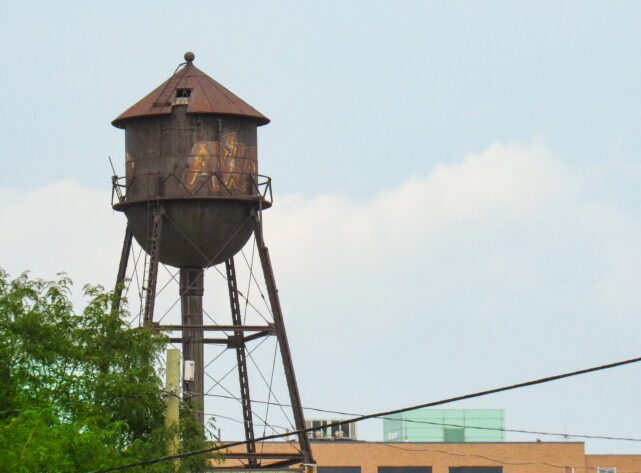 As an English major and a student, I’m an enthusiast of signs and symbols. As an American, I’m fascinated with branding, logos, and mascots. So much so, I’ve always wanted a full-sized fiberglass Big Boy of my own. I’m always curious how well the merchandising promise of a brand correlates with its delivered product. More specifically, I’m interested in how well a brand’s image reflects the society of the time.

Case in point: the Frisch’s Big Boy Mainliner in Cincinnati. I was going to Cincinnati for a work meeting when I passed it on the way into town, and knew I had to stop and take a look as I was heading home.

Dave Frisch was born into a restaurant-owning family in 1905. He worked in his family’s restaurants for over 30 years until he opened the Mainliner as a drive-in in 1939. The restaurant was a drive-in, with only 8 seats inside and parking for 60 cars to be serviced by car hops. The Great Depression had (for the most part) ended, and despite growing concerns about Hitler’s rise in Europe, Americans were feeling optimistic. Auto manufacturers had spent a decade focusing on marketing automobiles to only the richest people, which had created a luxury auto market. The Douglas DC-3, released a few years before and nicknamed “The Mainliner”, was the first luxury tri-motor airplane, capable of crossing the continental United States in 16 hours. After a decade of economic despair, it was a time of opportunity and upward mobility.

So Dave Frisch reflected that in his restaurant. The Mainliner became a popular destination for a fast, quality meal, enjoyed in the confines of an increasingly-mobile society’s archetypal symbol – the automobile. And to welcome its customers was the sign: stainless steel, neon, and a model of the namesake DC-3.

Growing up in the Rust Belt, I bristle at the ease with which people dismiss formerly-important neighborhoods. St. Louis’s Near North Riverfront is no exception. On a road trip to STL with my son last summer, Several well-meaning online commenters recommended avoiding the Near North Riverfront, where I had wanted to photograph a few surviving advertising remnants from St. Louis’s beverage industry past. Locals warned me not to leave my car in that area, under any circumstance. They described the environment as a predator’s haven; random violence, theft, or car-stripping awaited anyone reckless enough to leave their car in that area.

In the Rust Belt, areas like the Near North Riverfront are either “functional-and-ignored” or “forbidden” – in both perception and policy.

I’m disappointed in myself for listening to them. My entire Near North Riverfront experience was limited to a view from the Mississippi River. This photograph is the view of the back of the Ashley Street Power House, a landmark in St. Louis. Built in 1902, the front of the Ashley Street Power House is a worn beauty – a massive, turn-of-the-century Beaux-arts neoclassic. Union Electric Co. built three similar plants in Near North Riverside at the turn of the century. All three offloaded coal from river barges and boiled steam to heat the hundreds of buildings in downtown St. Louis. Only the Ashley Street Power House remains operational. At one time, the plant housed 34 working boilers; the coal dust and the functional brutalism of its backside remind us that this place was basically a caged inferno for decades.

Policies created to drive traffic to the nearby casino have kept people off the streets (many still paved with the original stone block) of Near North Riverside. But these are the lost opportunities I find most interesting. History can be viewed as a series of victories (“history is written by the winners”) or as a series of masteries. The former is a binary distinction that rewards one party over another, based on the “winner’s” adherence to their preferred ethics, mores, or goals. The latter measures importance in velocity; it is interested in motion (both progress and regress) and change… and the inspirations behind those changes.

The Ashley Street Power House is a testament to a “mastery”-based history. It heated and powered hundreds of city blocks at a time when St. Louis was packed with westward migrants and an economy designed to support them. In 1902, St. Louis was still in the process of supplying electricity to its buildings, and yet people managed to safely harness massive, Vulcan fireblasts and use them to make an entire city more liveable.

The lifecycle of a creative hub in American cities is interestingly similar. Cass Corridor in Midtown Detroit is an example of that. A working-class neighborhood – for whatever reason – becomes increasingly impoverished. With poverty comes crime and a lack of opportunity, and an economic spiral that eventually slows, but rarely stops. And unlike abandoned industrial areas (where large parcels of land decay and hulking structures crumble and people only exist pedestrians, travelers, or squatters), neighborhoods still have homes. Perhaps they’re neglected or damaged, but these neighborhoods have living spaces. And affordable places to eat and drink.

And that brings the artists. People looking for an inexpensive roof over their head and a cheap meal and a place to gather and have a beer. And they’re willing to weather the crime and the danger for an affordable place to create. And art tends to attract more artists, and eventually, the neighborhood becomes an interesting place to live. For a while, those areas have a Golden Age where crime is down, art is abundant, costs are cheap, and a true, genuine community is formed. These Golden Ages last until rent prices are driven too high, restaurants are no longer affordable, and community gathering places become havens for small groups of private individuals who never acknowledge or engage each other.

Wicker Park in Chicago. Williamsburg in Brooklyn. Most of Austin, Texas. They’ve all seen this same familiar cycle.

And now Cass Corridor – once a hub of violent crime, drugs, and prostitution – bears the same strange heavy-haunched nobility of an over-the-hill heavyweight champion. It walks an ever-uneasy tightrope, trying to balance generations of widely differing communities, the sheen of a history of artistic genius, and the plodding weight of the spoils of victory. It is beautiful and it is tired. It is not what it once was – for better and for worse – but it knows that few have ever been what it once was. It is a history simultaneously whitewashed and celebrated.

Anyway, this water tower still stands above it on Canfield Avenue.

Went to Rochester, MN for a memorial service and internment of a dear friend. Found myself looking for unique things to photograph, and found the water tower over the Olmstead County fairgrounds, upon which the county fair rides were being a erected a few days before opening day of the fair. Took this photo and thought about my history with my friend, and the Federico Garcia Lorca poem “Myself” came to mind.

My heart of silk
is filled with lights,
with lost bells,
with lilies and bees.
I will go very far,
Farther than those hills,
farther than the seas,
closer to the stars,
to beg Christ the Lord
to give back the soul I had
of old, when I was a child,
ripened with legends,
with a feathered cap
and a wooden sword.

Harpersfield Covered Bridge spans the Grand River, a tributary that collects Cleveland area water and drops it into Lake Eire. Built in 1868 in the wake of the Civil War, the bridge remained standing when floodwaters from the Great Flood of 1913 washed away the land at the north end of the bridge. Covered bridges stay erect by using a truss design which simultaneously holds the vertical length up by compressing some elements and putting tension on other elements, so there was no way to simply extending the bridge. Instead, what was created was just two independent bridges, connected together.

And so it was in 1913 that the steel expanse connected the settled northern bank with the covered bridge. It creates a unique, cobbled-together appearance, but remains on of the longest covered spans in Ohio.

And I almost climbed into the wrong car as I was leaving.
In front of the car’s owners.

They were not pleased.

The Poolside Motel in Geneva-On-The-Lake, Ohio was not a particularly well-reviewed establishment before it closed. It was a standard 1950s-era motor lodge on the shores of Lake Erie: one-story, four-unit bungalows with doors that open to a centralized parking lot.

It’s hard to tell if the outdated signage was there for nostalgia, aesthetics, or inertia, but when “color TV” and “ice” are your key selling points, lodgers may be in for an interesting night.

Also, the pool was empty and covered in garbage.

The history of octagon houses have a confusing history. Originating in the 1850’s, the North American versions were either designed as an homage to the pseudoscience of phrenology, or they were an unique approach to load-bearing walls. Others claim they were homes designed for the unitarian pious (all walls and rooms are of equal size and equidistant from each other), or for security from the rancor of the Civil War (frequent windows and vista porches made it easy to scout for approaching marauders).

Whatever the reason, the Gregg-Crites Octagon House in Circleville, Ohio was built in 1855 and sat on the main road between Columbus and Chillicothe, the original capitol city of Ohio. The original farm was sold in the early 2000s to Wal-Mart, and the house was slated for demolition to make way for a Wal-Mart Super Center. (Or, what we call “progress”.)

Fortunately, the Circleville residents were able to form a commission that moved the entire house to a safe location a few miles from its original home. They hope to renovate the house and turn it into a museum someday.

Kentucky is a mystery to me. It’s a place of total unpredictability. It was the first state west of the Appalachians. It was difficult to get to, and it’s rocky soil made agriculture difficult. It has a hardscrabble history atop some of the richest natural resources in the country. Possibly more than any other state, Kentucky has a lineage of tough-as-nails motherfuckers making due with very little.

It’s a state of fierce independents who make their living doing deadly work for low pay in industries that openly exploit them. It’s the third-most Federally-dependent state, but regularly and overwhelmingly votes candidates into office who support cutting Federal benefits.

Contradiction is Kentucky’s nature, and that tension of opposites creates both hopeless poverty in some, and a creative and indomitable will in others. It’s unsurprising that it has a legendary musical history. And less surprising that it was the birthplace of two of America’s most polarizing and intriguing figures: Muhammad Ali and Hunter S. Thompson.

I think I’ve read everything Thompson ever published. And like many Thompson fans, I wandered the murky, Blakean artist’s path between madness and wisdom. But Thompson was like an elite athlete of both. And like all elite athletes, he understood the nature – and the benefits – of sacrifice. His massive appetite for knowledge, experience, and intoxication led to insights into the human experience that few have been able to communicate. His was a life of madness and wisdom, of irresponsibility and wisdom, a walking contradiction. Like a true son of Kentucky.

“No sympathy for the devil; keep that in mind. Buy the ticket, take the ride…and if it occasionally gets a little heavier than what you had in mind, well…maybe chalk it up to forced consciousness expansion: Tune in, freak out, get beaten.”

This mural is on the side of a vegan restaurant in the Germantown neighborhood of Louisville.